14-year-old Isabelle Weall has every reason to be feeling positive.  Not long ago she became a two-time national champion in a sport she’s passionate about; trampolining.  What makes it especially remarkable is the fact that nine years ago the teenager was having to re-learn how to walk after falling ill with meningitis. 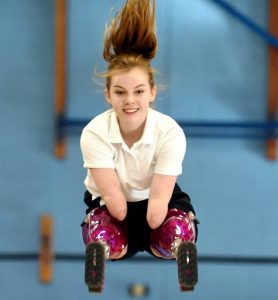 In 2010, Isabelle was rushed to hospital suffering from total organ failure and was quickly put into an induced coma.  She was given less than a 1% chance of survival and medical staff had to amputate her lower arms and legs in a desperate attempt to save her life.  Against the odds, Isabelle fought to pull through and then started the journey to re-learn everything from walking to writing.

Isabelle explains: “I couldn’t dwell on what had happened.  I just had to keep fighting for my life and be strong to build back up everything I had lost.”

Prior to Isabelle’s illness, she had barely stepped on a trampoline.  Aged 12 and at secondary school, Isabelle was on the hunt for a sports team to join.  Trampolining was one of the few on offer that already had a club set up.  Initially, Isabelle joined because her friends did and it was only when she was put forward to compete that she realised her natural talent.  Now, five years on from first taking to the springs, she’s gone on to win national trampolining championships twice over and has a passion for the sport.

Isabelle said: “Trampolining is fun and energetic but it’s also something no-one would expect an amputee like me to do so I love proving my capabilities to everyone.”

“Trampolining is fun and energetic but it’s also something no-one would expect an amputee like me to do so I love proving my capabilities to everyone.”

For the young athlete, the benefits of trampolining go further than an enjoyable hobby, it’s essential to make sure she stays as healthy as possible.  As Isabelle walks on blade prosthetics, she uses more energy, so staying active and healthy ensures she’s fit enough to enjoy all the activities that she wants to take part in.

She commented: “Being active helps my body keep up with me. I think that physical exercise also makes you feel better mentally, which is an added bonus.”