It’s fair to say that Allied Mobility’s sponsored racing driver, Aaron Morgan, has had an action-packed season in the BMW Compact Cup.  With seven thrilling races in 2018, we’re never in any doubt that Aaron leaves it all on the track.

For each circuit, Aaron competes in two races, with his starting position decided beforehand in a qualifying race.  We asked Aaron to pick his lows and highs of the season and his thoughts for 2019. 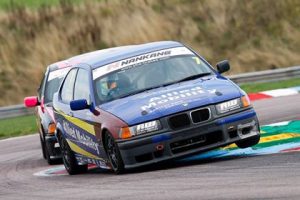 Without a doubt my low of the season was round three of the championship.  I headed to Lincolnshire for my race at Cadwell Park and unfortunately it was a visit to forget.

After a long four-and-a-half-hour drive to the track, I couldn’t believe it when my car issues started before I even hit the tarmac.  I realised the battery on my BMW racer was flat, meaning I needed a jump-start.

As I had to leave the engine running, agonisingly it overheated and ruled me out of the practice run.  I was nervous that it would potentially end my racing weekend all together.  My team worked tirelessly throughout the night to fix the issue so I could compete the next day and I truly thought my luck was changing!

The race day passed in a flurry.  Even with a weakened engine I managed to secure a decent place for the start of the race.  I was eager to turn my luck around and push my way through the pack.  However disaster struck yet again when I collided with the tyre barrier in only the second lap forcing me out of action.

By race two, the engine had been pushed to its limits and the temperature gauge was back in the red.  I knew my race at Cadwell was over.

It’s always been a goal of mine to finish a race in the top ten.  As the only disabled driver in a field of able-bodied drivers, it’s a difficult feat as I’m not able to accelerate in the same way so I lose vital places straight away. 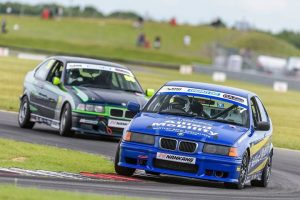 on that I experienced my season high.  I started well and stayed strong despite heavy and constant pressure from the drivers behind me.  As I crossed the finishing line and the chequered flag welcomed me home, I was actually really happy with how I’d performed, regardless of my position.

I was ecstatic to find out that I’d finished ninth!  This was also recognised by the championship as I was awarded the coveted ‘Driver of the Day’ trophy.  It was such a great achievement and special day in my racing career.

I’m delighted Allied Mobility will be continuing their sponsorship in 2019 and already can’t wait to push both myself, and my car, to new limits in the new season!