Most of us have spent time playing with Lego at some point or other.  The colourful building bricks can spark imaginations and fit together to build everything from toy rockets to skyscrapers.  But for Rita Ebel, a wheelchair user from Germany, Lego bricks are much more than toys to pass the time.  She uses them to build colourful ramps that help her work around the lack of accessibility in her town. 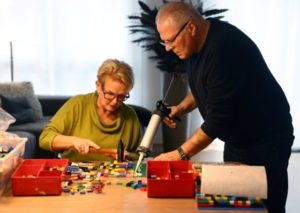 Rita has been a wheelchair user for 20 years after being involved in a car accident.  Unfortunately, the town of Hanau where she lives isn’t particularly wheelchair friendly, with steps up to doorways and numerous cobbled streets.  Rita was fed up struggling with the day to day accessibility problems, so she took matters into her own hands with an unusual and ingenious solution.

Using hundreds of the colourful bricks held together with super-strength adhesive for stability, Rita and her husband created a range of ramps in different sizes to make life more accessible.  Not only do the eye-catching creations make it much easier for her to get in and out of buildings, they also help a range of people, not just wheelchair users.  People pushing prams, using walkers or those who have visual impairments can also benefit from Rita’s designs.  What’s more, building the ramps out of Lego allow them to be transportable, uniquely customisable and the bumps on the top of the bricks offer up some much-needed grip on damp days. 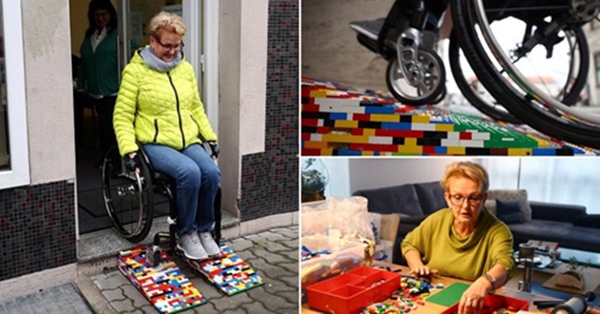 Rita may have found a solution for her own accessibility problems, but she also hopes it’ll highlight the lack of accessibility in the town she lives in.  Not only that, but she aims to educate others on plastic waste and the benefits of recycling.  So far, the project has garnered huge amounts of interest worldwide, including requests from businesses to replicate her idea in the USA.  Rita also receives regular donations of recycled Lego from people all over Germany who want to get involved.

With her project going from strength to strength, Rita is thrilled with its progress but is determined to ensure that it remains an accessible, free of charge service for everyone who needs it.

She said: “We are happy about every business that wants to have one of our ramps.  We give the ramps free of charge to stores, nobody wants to make a profit from the campaign.  Even if money is donated, we will buy more Lego bricks.”