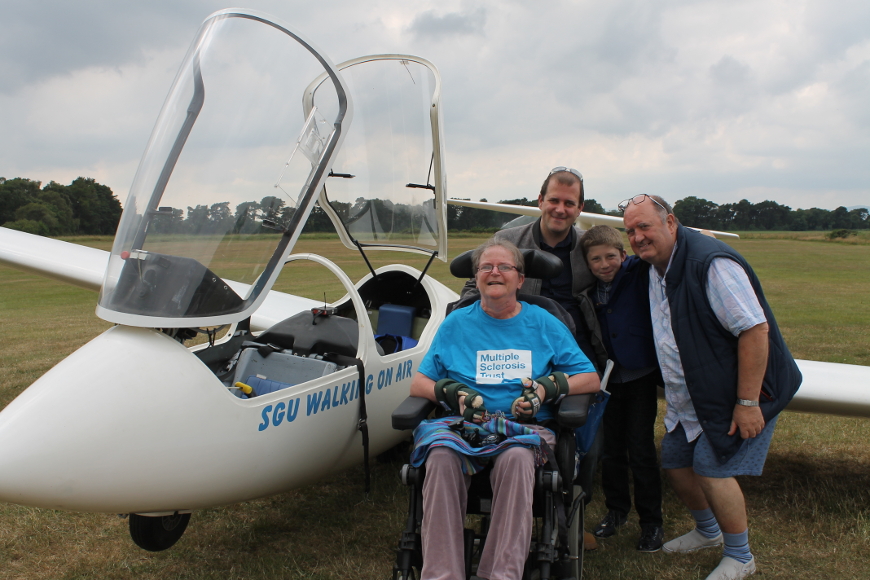 Margaret Ferry, originally from Guernsey, literally rose to the challenge of raising money for MS Trust recently – by flying in a glider!

61-year-old, Margaret, who was diagnosed with multiple sclerosis (MS) thirty years ago, teamed up with Scottish charity, Walking on Air, who helped her realise her amazing feat.

Billed as the “simplest form of soaring”, the specially adapted glider is engineless and uses its wings to produce the lift to keep the aircraft airborne.  Capable of reaching tens of thousands of feet in the air and travelling distances of over 600 miles, gliding is fast becoming a popular sport and Walking on Air is one such charity making this experience a reality for disabled people too.

“Before I went up I thought that it would be brilliant, but it not only lived up to expectations, it surpassed it!”

Before her MS diagnosis, Margaret would often participate in various events to help raise money for different charities.  Realising she had a brilliant chance to raise money for a charity very close to her heart, Margaret researched potential activities and happened upon gliding.  She contacted Walking on Air and booked in for her inaugural flight.

Allied Mobility caught up with Margaret after the flight and she talked us through the special day.  Margaret enthused: “Before I went up I thought that it would be brilliant, but it not only lived up to expectations, it surpassed it!”

With no movement in her hands, arms and legs, Margaret was lifted from her wheelchair into the cockpit and took her place in front of pilot, Andy.  The glider was then towed into position and attached to a winch, preparing the aircraft for flight.  The winch pulled the glider into the air, similar in the way a kite is launched.

The pair rose to 900 feet and the clear blue skies meant the two could see for miles.  Margaret continued: “I did shut my eyes for take-off but after the views were incredible, I could see all the way across Loch Leven.”

Margaret was able to raise an outstanding £1,010 for MS Trust and Walking on Air, and Allied Mobility was delighted to contribute to her amazing accomplishment.