Hello!  For my last blog of 2018 I’d like to talk about my life with Cerebral Palsy.  I was recently invited to speak at The Christmas Get Together for Adults with Cerebral Palsy 2018 lunch at the Bobath Centre.  The centre is particularly close to my heart as I first visited the centre in London as a baby and I still attend for therapy to this day. 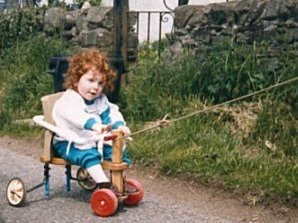 I was born in Perth, Scotland in 1984 and during my birth the umbilical cord was wrapped around my neck causing my breathing to stop.  After some time, the doctor told my parents I wouldn’t make it.  I must’ve heard him and started breathing again.  I think this is when my fighting spirit started!

After my family were told I had Cerebral Palsy they found out about The Bobath Centre in London.  We made the first trip to London when I was one and I had my first therapy session.  The support that we received as a family, and how I felt after each session, was such that we made sure we went back every few months.

I initially started education in my local mainstream school.  Even though I had a great helper, there wasn’t enough support.  As my family and I stayed in a very remote area in the highlands, we had to move so I could go to a school where they had everything I needed.  I made many great friends here – some of whom still are to this day.

After school, I attended Reid Kerr College to study for the European Computer Driving Licence (ECDL).  The ECDL is a computer course which teaches you everything you need to know about Microsoft software.  There’re modules on each subject and at the end of each section I had exams.  The lecturers gave me some extra time during the exams as I was using my IntelliKeys keyboard.  Cerebral Palsy didn’t stop me excelling (pun intended!) at college and I came third top in my class!  This was an amazing feeling and I was put forward for the Provost’s Community Awards – and I won!  I couldn’t believe it.  I was even given a trip to London as my prize.

Although I’ve found securing employment difficult over the years, I’ve had many volunteer posts.  I’ve been a secretary for several organisations including Users Groups (where I help people who use direct payments from the local authority) and my wheelchair dancing group.  I order the teams clothes for the competitions and take the minutes at meetings.   I’m also involved with You First Advocacy.  In this post, I’ve helped people in housing and even got money back for someone who was overcharged care costs.  I’m also involved in training new Advocacy workers.

I hope you enjoyed my blog and I wish you all a very Happy New Year!