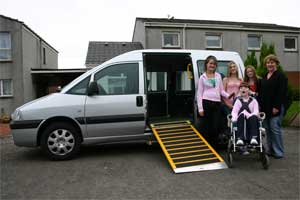 The Cameron family from Kirkliston, West Lothian are enjoying getting out and about in their new Peugeot Independence. Supplied by Allied Vehicles, the Independence is specially adapted to transport one wheelchair passenger, driver and up to five other passengers and features the unique new EasyGlideTM under-floor ramp.

Dad, Dougie Cameron, explains: “We chose the Independence for our 8 year old daughter Louise, who has cerebral palsy, because we needed a vehicle with wheelchair access that was large enough for the whole family. Louise travels in her wheelchair and it’s great that she’s in the centre of the vehicle, rather than left at the back.”

“The EasyGlide TM ramp is so light and easy to use and unlike hydraulic ramps we have no worries about it breaking down,” commented mum Josie.

The EasyGlideTMramp is unique to Allied Vehicles and simply pulls out from underneath the floor and is ready for use in a matter of seconds. The Peugeot Independence model is popular with both families and care organisations.

“We’re really happy with our Independence,” enthused Dougie. “Louise feels secure which is the important thing. Now we can all go out together as a family and there’s even room for friends to come along too.”

“We were over the moon with our new car” says mum Josie. “I can’t believe how spacious it is. There is plenty of headroom and floor area to work around as it takes a few minutes to secure Louise in,” said Josie.

“The Independence is also a popular hit with our teenage daughter, Laura and her friends. They think it’s ‘cool’. There’s plenty of room for them, a built-in CD player to listen to their own music and Louise just loves being in the middle of it all rather than being stuck at the back. It’s a winner all round!”

Dougie first saw the multi passenger vehicle at the Independent Living exhibition in Glasgow earlier this year. “I recognised Bob, one of the Mobility Advisers and built a rapport with him. I found him very helpful and he made sure we got what we needed.”

Allied Vehicles arranged to demonstrate the Independence at the Cameron’s home so they could all try it out for size.

“We’re planning a trip to Pitlochry in the Scottish Highlands so we’re looking forward to going in our new car.”