British table tennis pro, Will Bayley, is in a race against time to reach full fitness for the 2020 Tokyo Paralympic Games in August.

Will, who was born with arthrogryposis, was starring on BBC’s Strictly Come Dancing last year when his stint came to an abrupt and untimely end.  He suffered anterior cruciate ligament damage to his knee which not only quashed his hopes of lifting Strictly’s sought after ‘glitter ball trophy’ but also put his Paralympic plans in jeopardy.

“People will be saying it’s impossible, but I believe it is possible”

After leaving the show to focus on his recovery, Will was hit with a setback when his initial rehabilitation failed and forced him into having surgery.  The 2016 Paralympic gold medallist is not one to be easily defeated however, and he credits his positive mental attitude as the driving force behind his recovery.

Will told BBC Sport:  “People will be saying it’s impossible, but I believe it is possible. If you believe you can win on a couple of months’ training, you have got half a chance. If you write yourself off, you have no chance.” 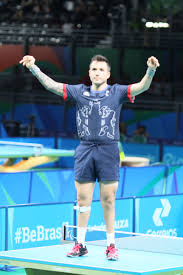 Will competes in the Class 7 category as his arthrogryposis affects all four of his limbs.  Class 7 applies to athletes with disabilities who can play their sport standing.  Will was victorious in the Rio Paralympic Games in 2016, taking the gold in singles and bronze in the team event.  Despite his forced break due to injury, Will is still ranked third in the world.  He hopes he can continue to build on his recovery and stay positive, with his sights firmly set on making a return in time for the 2020 Games.

He enthuses: “It’d be my biggest achievement if I could bring back a medal from Tokyo.”