Hiking is more popular than ever, as many choose to get outdoors as part of a healthy and scenic hobby.  But one man has taken on a mountain of a mission to raise money for a disability charity.  Ross Cunningham, from Glenrothes in Scotland, has certainly set himself a steep challenge. He’s climbing 21 Scottish mountains in 21 days, making his final descent just in time to mark World Downs Syndrome Day on the 21st of March.

“The number of donations I’ve received so far is giving me the motivation to keep going.” 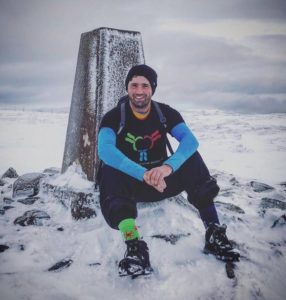 Ross has been a keen mountain climber for a number of years, spending most weekends hiking in the great outdoors.  He discovered his love for the activity as it helped him through a particularly difficult time in his life when he was suffering from depression.  This year, Ross set a New Year’s resolution to raise money for the charities closest to his heart.  When he learned of Downs Syndrome Scotland’s campaign to encourage people to take part in their ‘21-in-21 challenge’, he jumped at the opportunity to get involved.

A Cause Close to his Heart

Ross was inspired to help the charity after striking up a friendship with Tom who lives with Downs Syndrome.  Ross found Tom so vivacious and uplifting that he chose him to be the subject of a short film he was making.  The film followed a week in the life of Tom and explored the highs and lows of living with Downs Syndrome.  Now, several years after first meeting Tom, Ross is almost halfway through his mission to raise as much money as possible for a charity that means so much to him.

Ross says: “Tom is one of the most positive, friendly and inspiring people I have ever met. He is someone who lives an independent and fun-filled life and contributes to his community.  Down’s Syndrome Scotland do a great amount of work helping people with Down’s Syndrome achieve their potential and challenges like the one I am undertaking will help to raise more funds for a truly great cause.”

Almost at the halfway point, Ross has so far conquered ten mountains in as many days and his determination shows no sign of slowing down.  With just over a week to go and 11 more peaks to scale, Ross has so far achieved a whopping 92% of his £1,000 target.  While he understands the magnitude of his feat, the kind-hearted hiker is kept going by the difference he hopes his extraordinary mission will make.

Ross concludes: “Even though I enjoy hiking, taking on 21 mountains is a big ask, but I’m confident I can complete the challenge by March 21st.  The number of donations I’ve received so far is giving me the motivation to keep going.”

To support Ross’ fundraising hike, head to his JustGiving page.