Recently there has been a growing amount of evidence for the health benefits of music, especially for those living with dementia.  Now, a famous face is joining the crusade in a new documentary hitting our screens this week.  Actress Vicky McClure will be heading up a choir made up of singers with dementia in order to highlight the positive impact that music has on the wellbeing of those living with the condition. 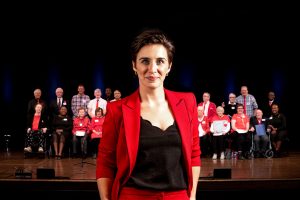 A Cause Close to the Heart

Vicky, recognisable from her starring roles in Line of Duty and This Is England shows that it’s not only acting that’s close to her heart.  She’s passionate about furthering the research into finding a cure for dementia.  Over 850,000 people in the UK live with the disease and the number is set to increase in the coming years.

Vicky has a personal connection with the disease after her grandmother was diagnosed with the condition.  Vicky explained the upsetting effects of the disease taking hold of her grandmother, and the powerful impact that music had in counteracting the symptoms.

Vicky explained: “I saw how music helped my grandmother, changing her mood, calming her down and for a while bringing us back to the old Nonna.” 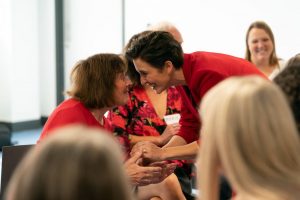 The actress was so inspired to join the fight that she teamed up with the BBC and the University of Nottingham to make the documentary, Our Dementia Choir.  The two-part documentary premieres on BBC1 in early May and will see Vicky and a team of scientists delve into the effect that music has on the brain.  The programme will also follow the choir as they prepare to perform in front of 1,000 people in the Royal Concert Hall, London. 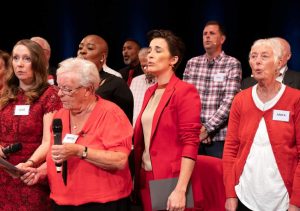 As an ambassador for the Alzheimer’s Society, Vicky took the opportunity to call for more funding into the research of dementia, as further understanding of the disease is needed to get closer to finding a cure.

Vicky said: “The government doesn’t put enough funding into research.  I am passionate about looking into that.  I want to know what’s being done on that side of things.”

The actress’ final word was to quote Bob Marley to make her point.

Tune into Our Dementia Choir starting on the 2nd May at 8pm on BBC1.