Hello!  For my September blog, I’m going to talk about the different communication aids I’ve had during my life.  As I explained in my first blog, due to my Cerebral Palsy, I have no verbal communication so I use a device.  This is just part of me and I like to think that although I might talk via a talker, I can get my message across to people just the same. 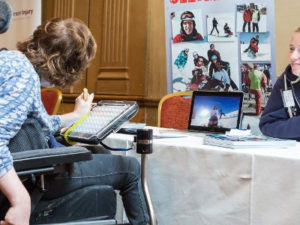 I’ve found that communication aids usually only last four to five years, by which time they become unreliable and the software outdated.  I’ve had four such devices since the age of seven.

My first device was an American machine called the Liberator.  As the talker was programmed with an American accent, it didn’t feel quite right.  I certainly didn’t like sounding like Bart Simpson!

Next came the Dynavox, which I got in my late teens.  At £6,000, it was a very expensive device and my family and I had to do a variety of fundraising events to raise enough money to cover the cost.

After that I opted for the Power Box.  It was the first talker I’d used with a Scottish woman’s voice.  It was great as it was quick and easy to use.  It had an even greater importance to me as I’d just become an Advocacy Worker.  I also got my first boyfriend at this time and I was finding communication a lot easier! 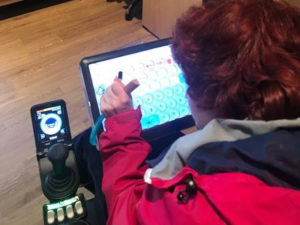 That brings me to my current talker, the Mobi.  This was the first device funded by the Government which was a great help as it alleviated the stress of sourcing the money to pay for it.  It’s much more user-friendly and similarly to the Power Box, I speak with a Scottish accent.  It also has some amazing additional features meaning I can text, access the internet and go on Facebook too, which I love!

I use a stick (a small T-Bar) or my fingers to operate my Mobi and I also have a key guard over it to stop me pressing the wrong buttons.   There’s also a program called ‘The Grid’ which is a layout like a qwerty keyboard.  This can be switched out for another layout which lets me select some sentences or another with numbers.

The most exciting thing about the Mobi is the improvements they are making to the accent.  The company recorded my sister saying a variety of sentences and plan to mix this with a localised accent.  I got to hear a rough version of the voice and it sounds amazing!

I feel there’s been a huge difference in the way people treat me since the Lost Voice Guy won Britain’s Got Talent.  In my opinion, people are so much more accepting and interested in my talker and now give me the time to finish what I am saying.

I hope you enjoyed reading my blog!