Move over Marvel, there’s a new team of superheroes on the scene.  ‘The Department of Ability’ is a crew of cartoon crusaders with a special set of skills between them.  Each character has a visible disability along with their super power.  The graphic novel of the same name, which took over three years to complete, could soon be hitting the shelves near you.  Creator and artist, Dan White was inspired to put pencil to paper for the most important superhero in his life, his daughter Emily.

“The Department of Ability showcases disability as power and strength.  Every kid, no matter what, has that ability.”

Dan’s daughter Emily was born with Spina Bifida and uses a wheelchair.  Now 15 years old, she’s been a fan of comic books for years but felt disheartened due to the lack of representation of people like her in them.  When Dan noticed this lack of inclusivity, he decided that he would do something about it.  ‘The Department of Ability’ was soon born.

Dan explains: “When you’re in this community, you see these kids who are desperate to be involved but they just can’t do it.  You either see red and go off the rails or take the bull by the horns and try to fix it yourself.” 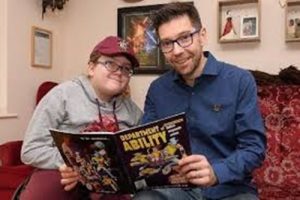 The central character in the graphic novel is none other than Emily.  Complete with flying wheelchair with detachable wheels that transform into shields, she’s joined by a collection of super friends.  There’s Azzi, the alien with a prosthetic arm from crash landing his spaceship to Earth, Pawsy, who uses a running blade, allowing him to reach supersonic speeds and Claypole, a partially resurrected scientist with a visual impairment who uses a white cane.  The team is completed by Billy the dog who doesn’t have the use of his back legs and instead uses wheels.  Together, the friends fight crime and injustice and have so far encouraged thousands of young people with disabilities across the world. 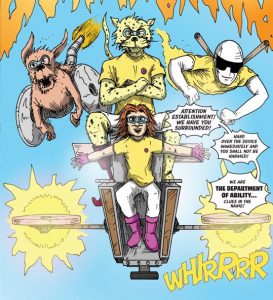 Since Dan released ‘The Department of Ability’ in 2016, the graphic novel racked up 1,000 orders in its first month and has gained some famous fans, including Zoë Ball and Paralympian Hannah Cockroft.  The two even make cameo appearances in the novel.  Now Dan has his sights set on completing an audio version of the book especially for children with visual impairments.  He’s also in talks to create a children’s book series centred around a new group of disabled characters.  Dan’s ultimate aim however is for people with disabilities to become more visible in mainstream media and hopefully ‘The Department of Ability’ can kick start a movement for change.

Dan surmises: “The Department of Ability showcases disability as power and strength.  Every kid, no matter what, has that ability.”