The lives of people with visual impairments may soon look a lot more futuristic thanks to an inventive student from Loughborough University.  Anthony Camu has designed a robotic guide dog to help visually impaired people get to their destinations safely and easily.  What this robo-dog lacks in cuteness, it makes up by using cutting edge technology inspired by virtual reality gaming consoles. 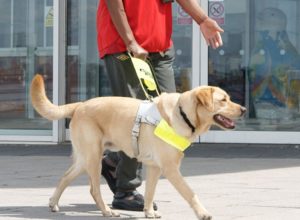 The small and sleek device, named Theia, after the Greek goddess of sight, has been designed as a practical alternative to traditional aids such as white canes and guide dogs.  Theia is especially geared towards people who don’t want to use the more traditional aids, perhaps due to unsuitable accommodation or allergies.  Designer, Anthony, hopes the initial prototype will take off and it will promote further independence amongst the blind community.  Summing up Theia, he says: “The best way to describe it is a guide dog in a machine.”

Technology at Your fingertips

Theia can fit comfortably into the user’s hand or a large pocket if they want to conceal the device.  Using a specialised gyroscope with a unique feedback system, Theia ‘leads’ the user around obstacles and to their destination.  It’s designed to feel similar to holding the harness of a guide dog or a friend’s elbow.  Not only that, but Theia has built in voice recognition technology, allowing the user to speak out loud to the device and get an instant response.  Then, like a Sat Nav, the gadget quickly calculates the quickest route for the user.  It even taps into real time data, like weather and both traffic and pedestrian information to make sure there aren’t any unexpected hold ups. 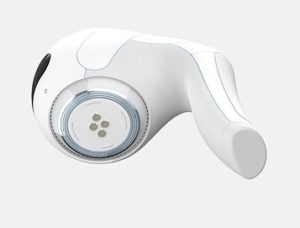 Many people consider their guide dogs to be companions as well as helpers, so Anthony understands that not everyone will want to forgo a four-legged friend in favour of his new gadget.  According to Anthony, he wouldn’t want Theia to completely replace the use of guide dogs but hopes it will become an additional option to consider.  Ultimately, Anthony hopes that the introduction of the high tech gadget will allow people with visual impairments to be able to think less about safely walking and more about what’s waiting for them at their destination.

Anthony concludes: “The ultimate goal is that Theia’s users can traverse routes safely and efficiently, at the same pace as, or even faster than ordinary people, without the worry and hassle of visualising the environment.”